Exactly How Much Wind Correction Should be used on the Outbound Leg of a Hold?

Both these rules are useful, but neither is precise enough to be used in all situations.

In order to determine exactly what multiple of inbound wind correction to use on the outbound leg, the dynamical equations for an aircraft in a hold were determined and solved (the math is shown at the end of this post).

The results are displayed in several graphical formats below.


It's interesting to note that as wind velocity approaches zero the required multiple approaches exactly 3, so the 3x inbound correction rule of thumb works well in light winds. Also of note, a headwind has a surprisingly large effect on the multiple required when combined with a crosswind.

The second graphical format is the below video which gives exact answers to to the question of required crosswind correction on the outbound leg for all possible integer valued wind directions and a wide range of wind velocities.


The final format is the below .gif which shows some of the same data as the videos, but in a format that is easier to share.

For the numerically inclined, a complete description of the problem and the equations used is given below.

FULL EXPLANATION OF THE PROBLEM AND EQUATIONS USED

When operating an aircraft in instrument meteorological conditions (IMC), air traffic control will often require pilots to perform a maneuver called a “hold.” This maneuver requires the pilot to fly in a race-track shaped pattern in the sky as shown below: 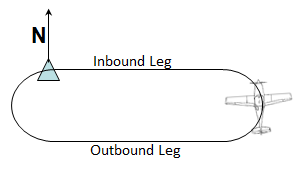 There are a number of FAA specified goals when flying a hold, for this paper the relevant goals are:

2. After completing the turn from outbound leg to inbound leg, the aircraft should be tracking exactly towards the station (the station is represented by a greenish triangle above).

4. When turning, the angular rate of turn should be exactly 3 degrees per second 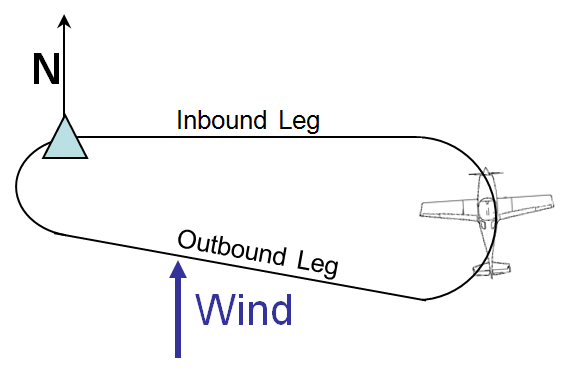 In this post I will attempt to find an equation that gives the precise multiple that should be used to achieve goal 2 and the precise duration to be flown on the outbound leg to achieve goal 1. I will do this by finding the equation of motion for each of the 4 segments of the hold as functions of wind velocity and heading (with true airspeed held constant). These equations will then be solved for when goals 1 and 2 are met.

To start we need to find the exact relationship between rate of turn (which must be 3º/second) and bank angle. I will derive this relationship here starting from the equation for normal acceleration in the tangential-normal coordinate system and the equation for radius of turn as a function of bank angle, which will itself be derived from equations for centripetal force and acceleration. Wind is assumed to be constant in these calculations.

1. Finding the Radius of Turn vs. Bank Angle relationship 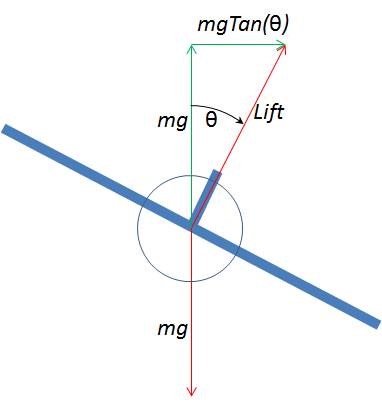 The formula for centripetal force is: mv^2/r, We are constrained to level flight per goal #5.

Setting the normal forces (the horizontal component of lift) to equal centripetal force we get:

Where r is radius of turn

2. Finding the angle of bank which yields a 3 degrees per second rate of turn.

In the tangential-normal coordinate system:

Using 9.80m/s2 for g and and converting m/s to knots using the following conversion:

Wind does not affect TAS so in all turns for this problem the angle of bank will be:


Setting up the Problem

There are three parts of the hold which are variable and one which is fixed: 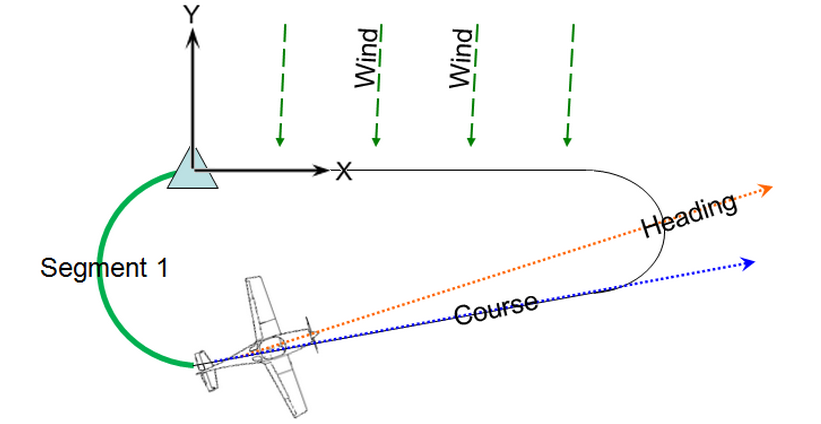 Segment 1 is variable, a constant 15.372 degree bank angle (assuming 100KTAS as in the example) will be held until such a time as the aircraft arrives at the desired heading for segment 2. In this problem we will assume that bank changes occur instantaneously though in reality changing bank from 15 degrees to 0 degrees takes about 2 seconds. Here we will try to determine the equation of motion for this portion of the hold in cartesian coordinates. For this problem we will set the zero degrees line to be parallel to the y axis as shown below, Additionally, because left turns in the hold are used in this example (and also in keeping with mathematical convention) *we will make angular displacement increase when traveling counterclockwise* as shown below, this is non-standard in aviation and could lead to confusion if not noted. 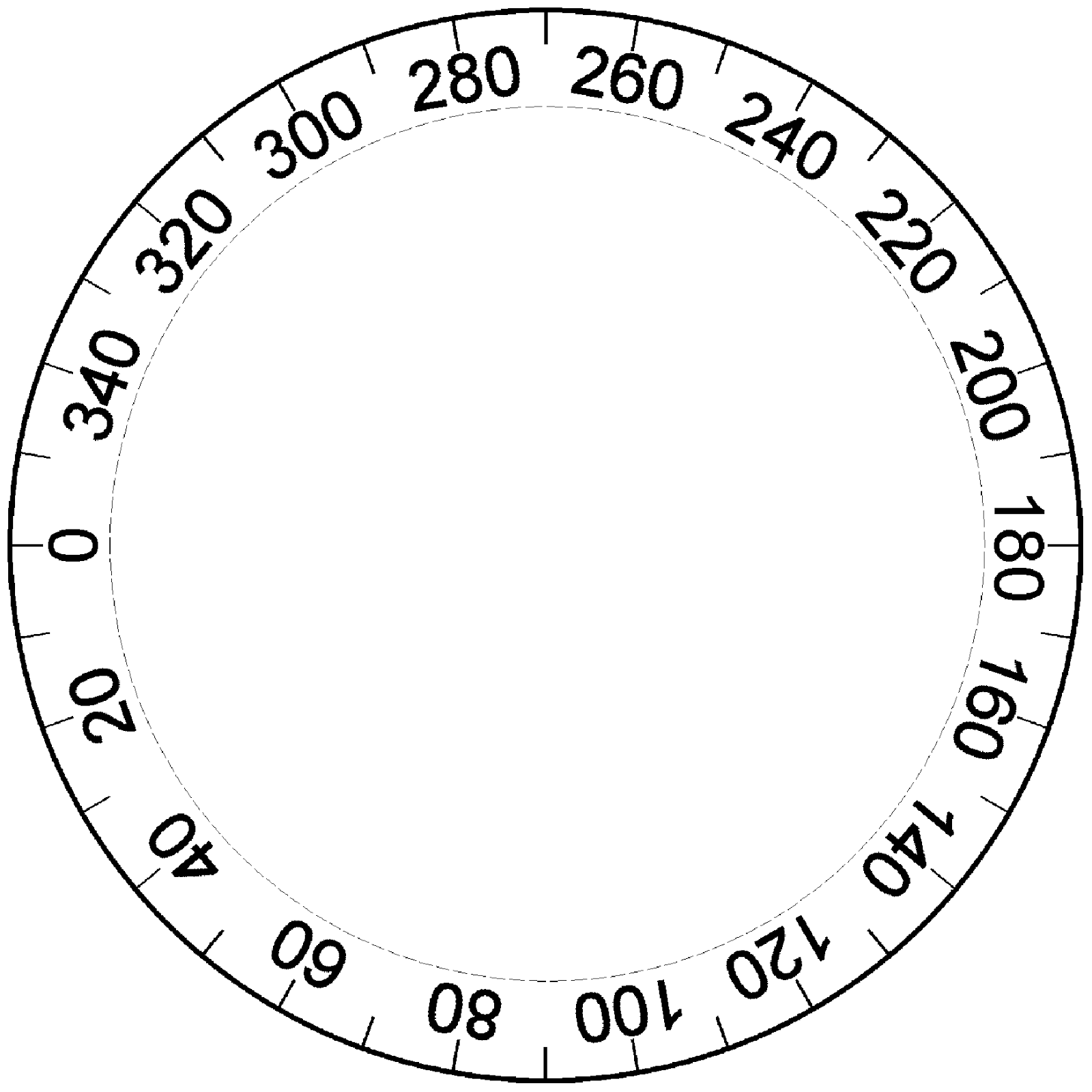 Acceleration here is all in the normal direction so the normal-tangential equation for acceleration:

The integral of this equation is velocity which is:

Integrating the above equation gives us position, here t1 represents the elapsed time in the first segment.

Here c2 represents our initial position, we will define the origin to be exactly at the station, therefore c2 is equal to the vector distance from the center of the turn to the station. The center of the turn is located at a distance equal to r in the direction (d) 90° left of heading, where heading is 0° + WCA therefore, d = 90° + WCA and c2 = rsin(WCA)i - rcos(WCA)j and heading at any given time will equal initial wind correction angle (WCA) plus θ degrees where θ = 3t, 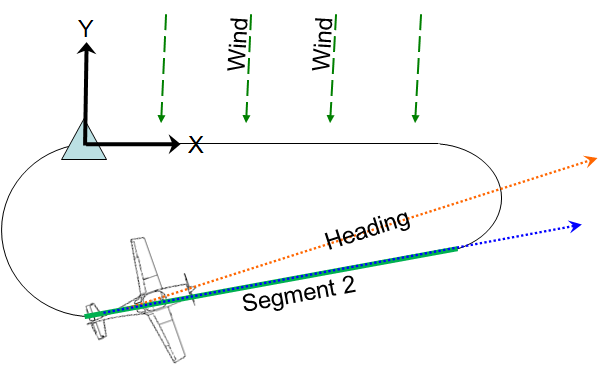 There is no acceleration during this leg, therefore: a = 0

Where c1 is equal to aircraft velocity vaircraft plus wind velocity w. The magnitude of the aircraft’s velocity is given as a state variable but the direction is determined by the duration for which segment 1 is flown, we will call this duration variable t1f, therefore:

and velocity can be stated as:

Taking the integral to get position:

Where t2 is the duration for which the second leg has been flown, c2 here represents the starting position which is the final position in segment 1 which is:

To simplify equations we will assign this expression the variable p1 therefore the equation for position for segment 2 is:

Segment 3 has constant bank angle and variable duration, it ends when the desired inbound heading is reached 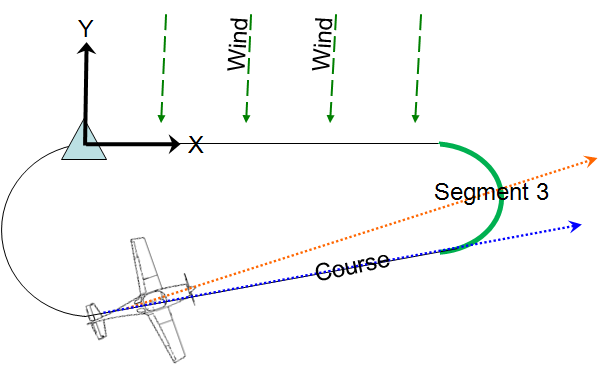 This segment is identical to segment 1 except for the beginning and end points and the degrees turned through, starting with the equation of motion:

The integral of this equation is velocity which is:

In this case c1 is wind velocity, for this project we will use the same variable w for wind.

Integrating the above equation gives us position, here t3 represents the elapsed time in the third segment.

and c2 is equal to the position (p2) at the end of segment 2 plus the distance from that position to the center of the circle which is being turned:

To simplify equations we will assign this expression the variable p2 therefore the equation for position for segment 3 is:

We will refer to this position as p3 for convenience. 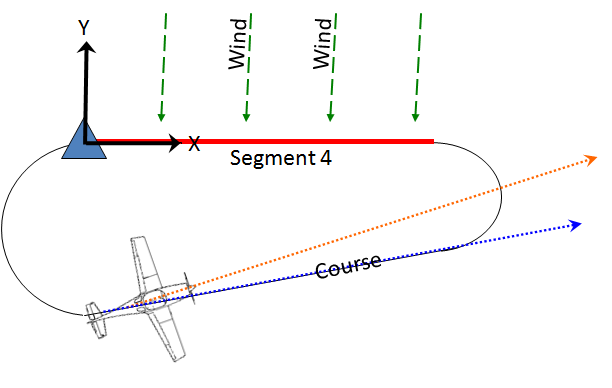 Above we have expressions for position and heading in the first three segments, we will split each equation into a y component and an x component and state them below:

And the equation of position for segment 2 which is:

The equation of position for segment 3 is:

Which becomes: (note d2j becomes negative because the direction of displacement is downward.)

Now we will add all the x and y expressions by using the full equations for p1 and p2.

We can equate these two equations to the equation from segment 4:

This gives us 2 equations, but there are three unknowns: t1, t2, t3 so we need a constraint equation, because heading ends where it begins (a total of 360° turned), and rate of turn is constant at 3°/s we can determine that:

Therefore our constraint equation is:

A successful attempt to solve this 3x3 system of equations was made using MATLAB. Here is a link to the MATLAB ".m" file that will solve for the required wind correction on the inbound and outbound legs of a hold: Link. This code will not run unless you have the Symbolic Math Toolbox for MATLAB, additionally the latest revision of MATLAB caused an error, will debug when time permits.

For those who are unfamiliar with MATLAB I will try to create an interactive web app in the future but for now the video at the top will be your best resource.
Posted by Nate dePutter at 13:51:00 No comments: 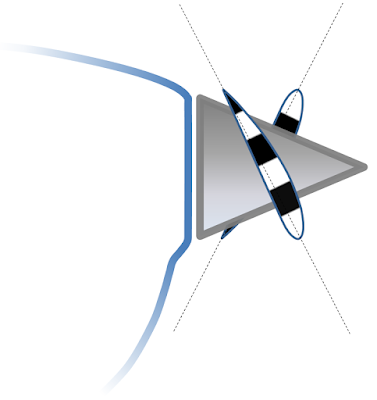